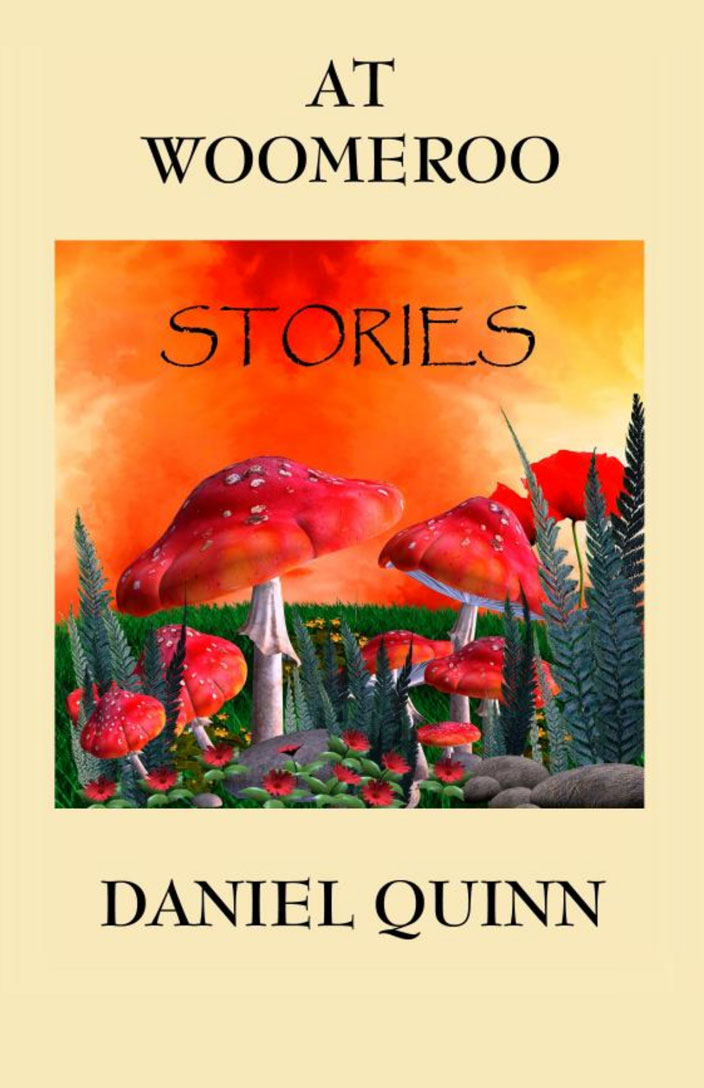 The stories in At Woomeroo were mostly written in the twelve years during which I was working on the book that became Ishmael, and they reflect a different side of me. Stumped by how to describe the output arising from this different side of me, I gave Michael Schillace (a dedicated Quinn reader) a chance at it, asking him to write a description of the stories for the back cover.

He did so with a panache I couldn’t have managed or dared, calling them “tales whose characters are immersed in a world of mystery, enchantment, and possibility. Quinn pulls back the curtain that hides the magic and reveals characters who live in layers of the world that are unseen by those whose vision has been limited by growing up in our culture. These stories can only take place in a world larger and more fascinating than the one that man’s dominion of the world has created. They are doorways into a space where people can find their own amidst the infinite possibility that arises when there is no one right way for people to live.”

You may get a different sort of taste of them by learning that a good number of them have been published in such exotic literary magazines as Asylum, Aberrations, Magic Realism, The Portable Wall, and The Shakespeherian Rag (as well as more sober journals such as The Lone Star Literary Quarterly, The Quarterly, and Fiction).

At Woomeroo is a land . . . where mirrors wink in the sunlight as people signal one another from the hilltops . . . where a squirming pink infant, babbling with excitement, arrives by mail . . . where a man turns his kite over to his small son, who is borne off by it over the hill . . . where a rooster says,”Oh good. Wonderful fine beautiful good. Really. Because now I’m going to kill you” . . . where between Tiffany’s and Ferragamo stands Tetwilder’s, a boutique dealing in designer children . . . where a king struggles to evade an inescapable curse . . . where, with the addition of a girl’s packing crate, the boy’s refrigerator carton becomes a commodious two-room hovel . . .

. . . where a digger finds all sorts of things in the ground, including an attractive young woman . . . where a top court confirms: No Civil Rights for Stomachs . . . where it gets to be time for visits, and the children from the workhouse come, weeping in their rags and sooty shoes, and everyone begins to feel much better . . . where a girl standing in the boundless sea shakes her head and asks with perfect innocence: “What is land?” . . . where as a captive in Japan, a U.S. State Department courier hones his skills playing table tennis with the unacknowledged son of the Emperor Hirohito.

Once he finally produced Ishmael, Daniel found he had other books to write – Providence, The Story of B, Beyond Civilization, and so on. And, sadly, he had no more time to spend at Woomeroo. But now at least he has collected these undiscovered stories in a volume called – what else? – At Woomeroo.

“Reading a book that entertains, instructs, and confounds me, I tend to deface it with underlines and asterisks.
Then I discovered I could mark paragraphs and sentences I want to remember and revisit with tiny sticky notes.
Seems like the more I am enthralled with a book, the more notes are sticking out of it.
My copy of Daniel Quinn’s At Woomeroo resembles a porcupine..”

“At Woomeroo is a book of fictional stories, each of which is brilliant in its own right. My impression of the voices
in the stories are variously dark, ambiguous, mysterious, sometimes hilarious, and always shed new light
on ideas both familiar and not so familiar. Now and again, I would think, Fyodor Dostoyevsky? Stephen Hawking?
Stephen King? Woody Allen? No…pure Daniel Quinn”