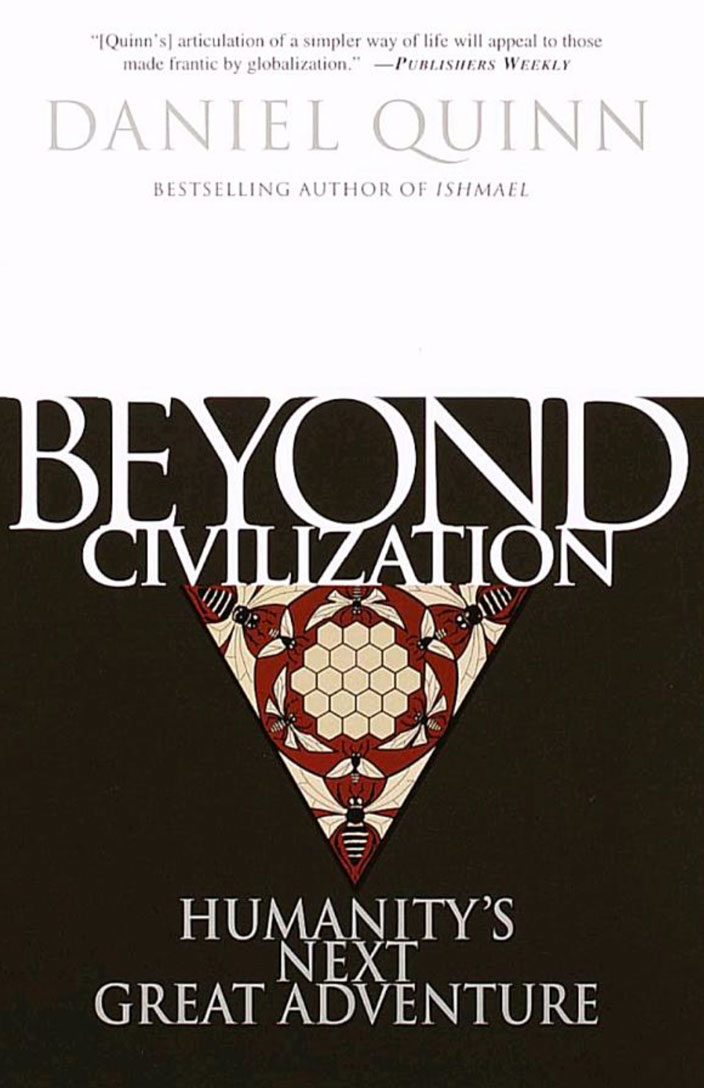 Beyond Civilization: Humanity’s Next Great Adventure

One of our most fundamental cultural beliefs is this, that Civilization must continue at any cost and not be abandoned under any circumstance. This notion seems intrinsic to the human mind — self-evident, like The shortest distance between two points is a straight line. Implicit in this belief about civilization is another: Civilization is humanity’s ULTIMATE invention and can never be surpassed. Both these beliefs exemplify the cultural fallacy, which is the notion that one’s beliefs are not merely expressions of one’s culture but are intrinsic to the human mind itself. The effect of this fallacy is that it’s almost impossible for the people of our culture to entertain the idea that there could be any invention beyond civilization. Civilization is the end, the very last and unsurpassable human social development.

No one is surprised to learn that bees are organized in a way that works for them or that wolves are organized in a way that works for them. Most people understand in a general way that the social organization of any given species evolved in the same way as other features of the species. Unworkable organizations were eliminated in exactly the same way that unworkable physical traits were eliminated – by the process known as natural selection. But there is an odd and unexamined prejudice against the idea that the very same process shaped the social organization of Homo over the three million years of his evolution. The people of our culture don’t want to acknowledge that the tribe is for humans exactly what the pod is for whales or the troop is for baboons: the gift of millions of years of natural selection, not perfect — but damned hard to improve upon.

Civilization, in effect, represents an attempt to improve upon tribalism by replacing it with hierarchicalism. Every civilization brought forth in the course of human history has been an intrinsically hierarchical affair–in every age and locale, East and West, as well as every civilization that grew up independently of ours in the New World. Because it’s intrinsically hierarchical, civilization benefits members at the top very richly but benefits the masses at the bottom very poorly–and this has been so from the beginning. Tribalism, by contrast, is nonhierarchical and benefits all members with notable equality.

It’s out of the question for us to “go back” to the tribalism we grew up with. There’s no imaginable way to reestablish the ethnic boundaries that made that life work. But there’s nothing sacrosanct about ethnic tribalism. Many successful tribal entities have evolved inside our culture that are not ethnic in any sense. A conspicuous example is the circus, a tribal enterprise that has been successful for centuries.

“As always with Quinn, his argument is crystalline and and reads like a thriller.
He show us that getting ‘beyond’ the mess of civilization doesn’t mean changing human nature or
setting off a revolution. we need only breathe new life into an ancient human strategy for survival.
Quinn’s plan is inspiring and devilishly clever.”

“Beyond Civilization is the most solid, real, practical, and you-can-really-do-it book you’ll ever find on how to save the world. Daniel Quinn has again proven he is one of our century’s greatest and most insightful thinkers.
The re-tribalization of the world: what an extraordinary possibility!”

Thom Hartmann, author of The Last Hours of Ancient Sunlight

“Ishmael was an enlightening read…but this book, Beyond Civilization, gets to the point and moves me to an entirely different perspective than that held by traditional political reformers. . . .Therefore, if you are interested in a new perception of the same old capitalist world, this book is a ‘must-read.'”
Full review – click here.

“Incredibly fresh overview of our culture. Mr. Quinn’s ability to extrapolate our present cultural situation through comparisons is truly remarkable. One begins to understand why everyone kills the messenger when they deliver a revelation to stop. The direction everyone is speeding in, goes against our survival.
We must look to change the cultural underpinnings our society from the top down.
Could not put it down. Have sent book unannounced to several friends.”

“A clear explanation of some of our most vexing problems, food for thought?
This book is a feast for the curious caring mind.”

“An excellent distillation of Quinn’s other works, with more of a focus on solutions rather than pointing out problems. If you enjoyed Ishmael or My Ishmael, you will certainly enjoy this.”

“I have spent the last ten years trying to do what Daniel Quinn is putting forward in this book, but without really knowing why, how or to what end. It is as if I knew deep down that this is a way out of the wrongs of our society, but I hadn’t formulated to myself any of it. The book gave me the means to define my vision and clearly define my goals.”

“Quinn is a visionary, possibly THE visionary, that eloquently shares how we (we being specifically western civilization) got here and where we may be headed. Unlike many doom and gloom books that are rather depressing,
Quinn proposes solutions and give concrete examples of our way forward.
I absolutely recommend this book to anyone and everyone.”

“Quinn makes you think furiously, and that’s really good. The second half of this little book is more challenging and gratifying than the first. And there are some delightful surprises for Quinn disciples.”

“Great view of our culture. Awesome book to read, to study and discuss.
My students and I really love working with it.”