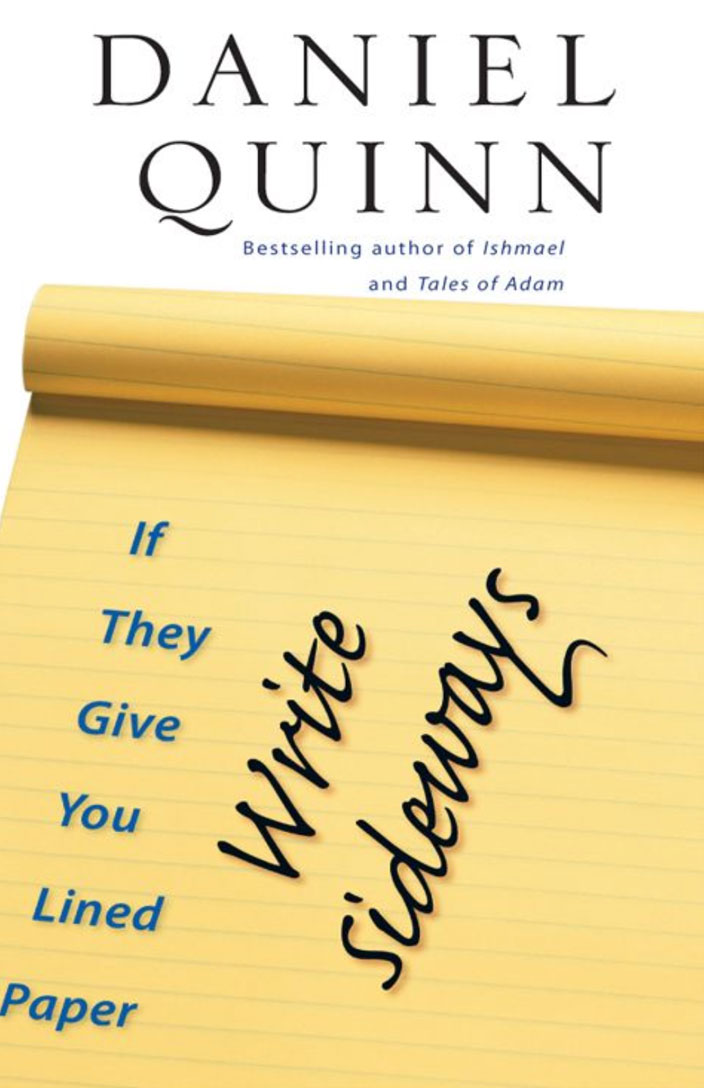 “My readers showed me with their questions and comments that my ideas really were alarmingly alien. The way I think about things, it seems, evolved in such a way that just doesn’t match the way most people think about things. I don’t know how it happened. It took me years to realize that it even had happened.

For the past four or five years I’ve spent a lot of time thinking about how to produce a meaningful answer to the question ‘How do I arrive at the strange, unexpected answers to the questions people ask me?’

If They Give You Lined Paper, Write Sideways is the best solution I’ve been able to come up with.”

In Ishmael, Daniel Quinn offered new ways of seeing and understanding human history, and our collective future. His message was transformative for millions of people, and Ishmael continues to attract tens of thousands of new readers each year.

Subsequent works, such as The Story of B and My Ishmael, expanded upon his insights and teachings, but only now does he finally tackle the one question he has been asked hundreds of times but has never taken on: “How do you do what you do?”

There is a scientific consensus that global warming is approaching a tipping point beyond no return faster than had previously been predicted. Quinn has long portrayed humans as “a species of beings, which, while supposedly rational, are destroying the very planet they live on.” So what are we to do? There has never been a plan for the future – and there never will be. But something extraordinary will happen in the next two or three decades; the people of our culture will learn to live sustainably – or not.

Either way, it will be extraordinary. The sooner we understand this reality, the greater the chances that human society will transform itself so that the human race might have a chance.

“Another great book from Quinn. Learned a great deal from his writings and about what it
takes to make a difference, a real difference. Perfect for our troubled times.
Thanks, and keep being a martian anthropologist, it’s a great perspective.”

“An amazing mind. Wow. I wish there was a clue to what we could do with this knowledge!
A brilliant mind wrote this book. I am never quite sure if I’m glad I read a Quinn book or if like
in The Matrix, I’d rather be rich and forget what I know.”

“This book gives great insight into many things about the author and his process, filling in the blanks with some context and, more importantly, serving as a handbook to allow you to learn how to see the world
(and hear/identify Mother Culture’s whisperings) for yourself.

Said another way, this book provides insight on just how the author came by his perspective on the world that allowed him to write Ishmael, Story of B, After Dachau, etc. Better yet, it teaches how you can do the same in everyday life.
It is something of a practical guide.”

At times humbling, other times empowering, If They Give You Lined Paper, Write Sideways
never fails to impart a big change in our thinking process.
We become part of the solution as soon as our thoughts are steered in a constructive way.”

“Quinn is not afraid to say the emperor has no clothes. For anyone who actually looks at the ideas that nations,
cultures and individuals are willing to kill over, or the myriad laws and taboos that “civilization” imposes upon the
minds and bodies of humans, it’s pretty clear that much of what we do creates
misery and puts us on a self destructive path.

So, it’s astounding and wonderful when someone actually dares to examine the basic assumptions of the stories
we tell ourselves and notes that not only is the evidence against those stories being true,
many of them are insane delusions. To do all of that AND to suggest alternatives to living out these insane
delusions, means the author performs a mighty service indeed.”

“It’s been almost ten years since I’ve read Ishmael, Daniel Quinn’s first masterpiece.
And ever since reading it my life has only gotten better. But I’ve always wondered how DQ worked out the
ideas in the book that shattered my worldview at the time. And If They Give You Lined Paper, Write Sideways
is the book that explains his frame of reference. The process he uses to see through the myths of this culture.”

“A few years ago, a friend of mine said that Daniel Quinn should receive the Nobel Peace Prize. I think my friend was on to something. Like DQ said in Ishmael, every prison needs a prison industry and our cultural prison industry is: Consuming life on this planet. Well, DQ has showed us the cracks in this cultural prison’s walls with his books.
Lined Paper is another one that may help us escape before we go extinct.”

“In his newest book, Daniel Quinn proves once again how dedicated he is to his readers.
He has written books (Ishmael the most famous) that are used in universities around the world,
and are consistently praised as “clear” and “original.”

When you approach great thinkers and ask them how they do it, you usually don’t get much of an answer.
They’ll often just look at you, either apologetically or smugly, and assure you that they “just do it”
and can’t really explain. With this book, Daniel Quinn gives us a close-up of how he’s been doing it his whole life.”

“Thought provoking and brilliant as always.
An absolute must for those who wish to see the world from an alien anthropologists perception.”

“As always Daniel Quinn delivers. Great reads for anyone alive today facing the reality of change.
He is a writer for all, with a vision that wakes the soul, mind and consciousness of all who dare pick the books up
and open Pandoras Box. Happy Journey. “B” creative and learn from those who know.”

“Great book. It really makes you think about the world in different way.
Some of the topics are controversial, but that’s what makes it so interesting!”