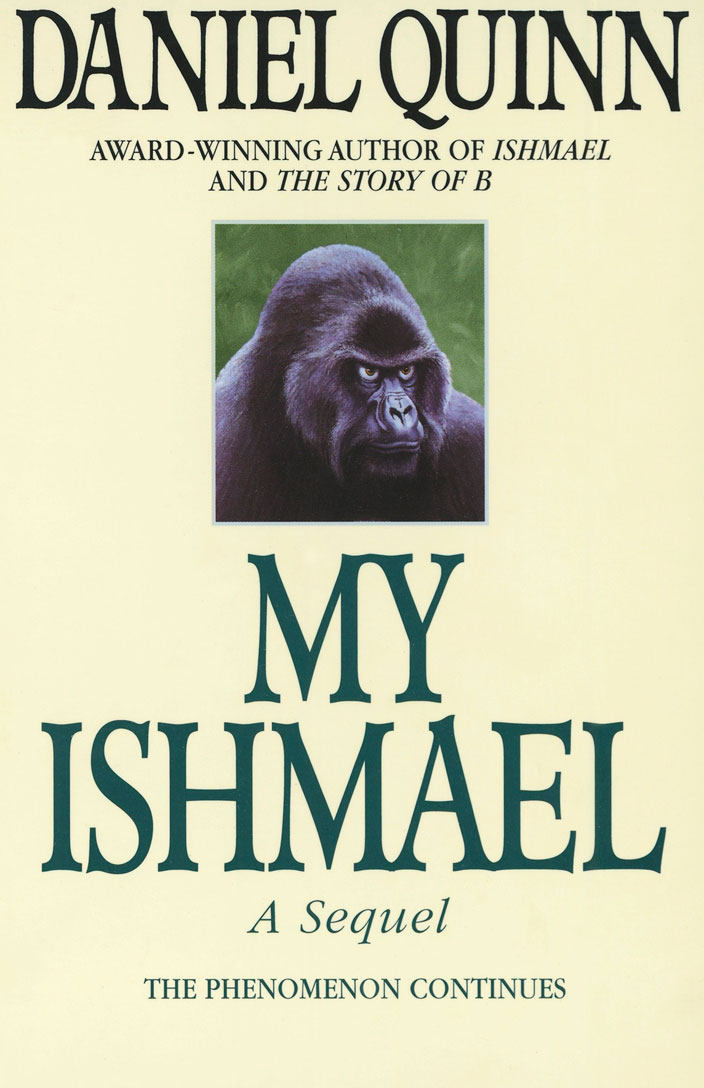 My Ishmael: A Sequel

Unbeknownst to the narrator of Ishmael, a second pupil responded to the ad in the paper –  twelve-year-old Julie Gerchak, whose interaction with Ishmael results in a dialogue strikingly different from the one found in Ishmael.

When Ishmael placed an advertisement for pupils with “an earnest desire to save the world,” he does not expect a child to answer him. But twelve-year-old Julie Gerchak is undaunted by Ishmael’s reluctance to teach someone so young, and convinces him to take her on as his next student.

Ishmael knows he can’t apply the same strategies with Julie that he used with his first pupil, Alan Lomax – nor can he hope for the same outcome. But young Julie proves that she is ready to forge her own spiritual path – and arrive at her own destination. And when the time comes to choose a pupil to carry out his greatest mission yet, Ishmael makes a daring decision – a choice that just might change the world.

An excerpt from My Ishmael:

“You know,” I said, “there’s something you could do that would help me a lot. I don’t know if I have any business asking, but there it is.”
Ishmael frowned. “Have I given you the impression that my program here is not subject to change? Do I really seem to you so rigid that I’m unwilling to accommodate you?”
Oops, I said to myself, but after thinking about it for bit, I decided not to be apologetic. I said to him, “It’s probably been a long time since you were a twelve-year-old girl talking to a thousand-pound gorilla.”
“I don’t see what my weight has to do with it,” he snapped.
“Well, all right, a hundred-year-old gorilla.”
“I’m not a hundred years old, and I weigh less than six hundred pounds.”
“Good Lord,” I said. “This is beginning to sound like something from Alice in Wonderland.”
Ishmael chuckled and asked me what he could do that would be helpful.
“Tell me what you think the world would be like if we actually did manage to ‘start living a different way.'”

“Irresistible…[Quinn’s] ideas are as thought-provoking as ever.”

“Quinn engagingly presents an antidote to a fundamental flaw of our culture, invoking a law in human history that can halt our civilization’s plunge toward planetary catastrophe.”

“Enthralling, shocking, hope-filled, and utterly fearless, Quinn leads us deeper and deeper into human heart, history, and spirit. Thank God the Gorilla is Back! In My Ishmael, Quinn strikes out into entirely new territory, posing questions that will rock you on your heels, and providing tantalizing possibilities for a truly new world vision.”

“I’m crazy about any book that can get people, especially young people, excited about ideas. And that’s just what Quinn has done with his writing…[He] has an amazing story to tell.”

“My Ishmael isn’t just a sequel to the original. Instead, the original must be seen as a springboard for this new penetrating look into the machinery of our own culture, with all the drama and intrigue that a culture’s history has to offer. If you’re not changed after reading My Ishmael, you’re dead.”

“This is the sequel to Ishmael. This time the student is a 12 year old, street wise little girl. She wants to know why we work am 8 hour day…The book is such an easy read, it was a pleasure. I enjoyed it very much and was sad when I knew I was coming to the end. That rarely happens to me anymore.”

“I recommend anyone slightly dissatisfied with life to read this, especially young people. It will help you realize how you likely wish to live, and that you aren’t crazy for wishing to live differently than the other 95% of people.”

“I read this book/story when my daughter was in high school 12-13 years ago.
My Ishmael– was required reading for one of her classes.
This story is very thought provoking and I have never forgotten how much I loved the story.
My Ishmael should be read by every young/old adult.
The message will never go out of date, and relates to all people, cultures, ages, beliefs.”

“Appropriate ending of the trilogy… glad to see that it wasn’t same message re-hashed…
different perspectives make it whole… kudos to Mr. Quinn!”

“Quinn’s original Ishmael began to change the way I think more than twenty years ago.
Then came The Story Of B which was more informative but not so magical.
With My Ishmael the magic returns, and it’s my personal favorite of the three.”

“Ishmael is my favorite series of books! I purchase these books to give to friends and family
because they are absolutely profound. A must read for everyone on the planet.”

“Didn’t think Quinn could outdo Ishmael but he did it again.”

“For those readers of Ishmael who didn’t want the journey to end, good news, it doesn’t have to.
There was another student and another wonderful story to be told.

I don’t want to give away anything, but I will tell you that both Ishmael and My Ishmael share some common threads and somehow Daniel Quinn manages to tie up the original tale of Ishmael in a way that both surprised and excited me.

I highly recommend this book as well as The Story of B to any and all that enjoyed Ishmael half as much as I did.”

“I have been searching for Ishmael-like people. The book was historical, yet very current. It is motivating because once you have information, you cannot dismiss it. Ishmael laid it out very clearly. The issue becomes how do you use it. So I debate placing an ad in the paper: Looking for partner to help put Ishmael-like thoughts into action.”

“This book follows the excellent work of Daniel Quinn. For me, the series is a must read at least once a year. I have re-evaluated the way I see and think of the present. Great stories anyway with wisdom included.”