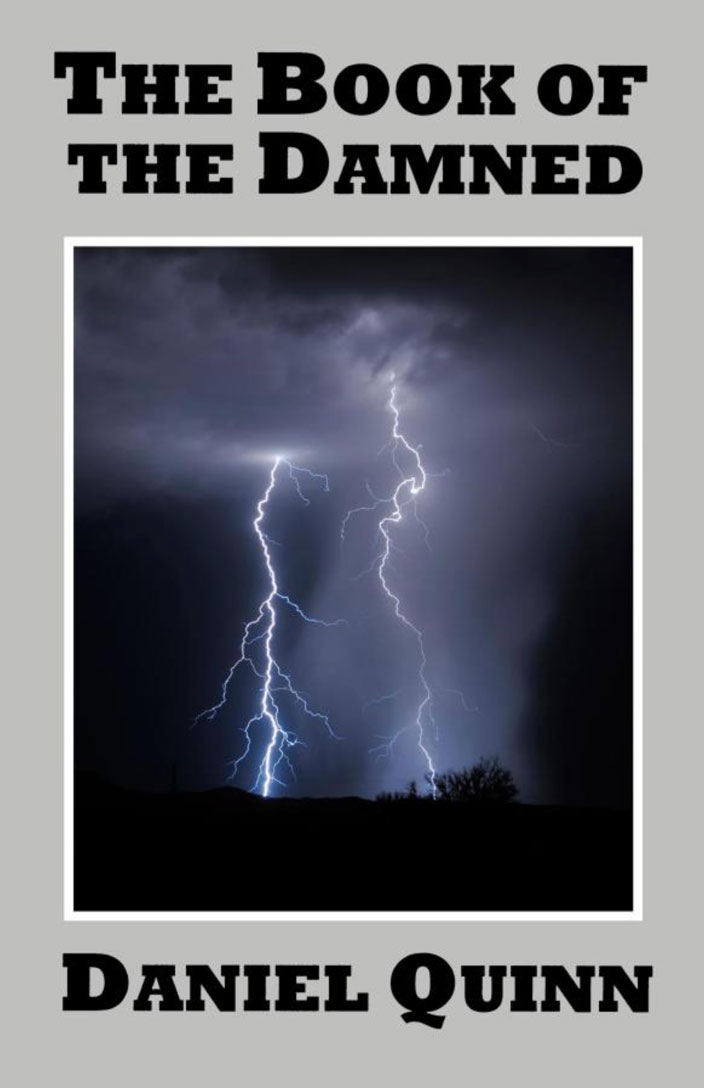 “The book for which I’m best known, Ishmael, came into being over a twelve-year period, beginning in 1979. It wasn’t work on a single book. Rather, it was work on different versions of what eventually became a single book: Ishmael, the eighth version and the only one in which the teacher Ishmael appears.

When I started writing The Book of the Damned in 1981, I was sure I’d found the book I was born to write. The versions that came before had been like rainy days with moments of sunshine. THIS was a thunderstorm, and the lines crossed my pages like flashes of lightning.

When, after a few thousand words I came to a clear climax, I said, “This MUST be seen,” so I put Part One into print. Parts Two and Three followed, and I began searching for the switch that would turn on Part Four . . . but it just wasn’t there. I clung to it for a long time after issuing the first three parts, desperately hoping to find a way to produce additional parts that would bring it to the conclusion I knew was “out there.”

What I’d done was terrific – and complete in its own way – but at last I faced the fact that the whole thing just couldn’t be done in lightning strikes . . . Another ten years passed before I found the way, a completely different way . . . in Ishmael, which was the embodiment of my message, providing the foundation for the clarifications, amplifications, and extensions still to come.

But publishing The Book of the Damned had been no mistake. It deserved to be published, and it still does. Those lightning strikes illuminate an apocalyptic landscape never seen before—or after, in any of my later books (including Ishmael).”

“I am not really objective about this book; it struck a deep chord for me.
You will love it, or you will struggle with it. But if it does not cause you to think about this world
and how it all fits together, you’re dead already and may as well lie down.”

“It was excellent to read a bit of Quinn’s own ire in the text that eventually became Ishmael.
It also provides a nice concise view of the history of our culture and good talking points for those
of us who endeavor to shift the trajectory of an unsustainable culture.”

“For anyone who desires to truly understand who we are as human beings and why our culture stands upon
the precipice of extinction, this is one of the most essential and required readings you will ever find.

The Book of the Damned is nothing less than a journey of awareness that will literally change the lives
of anyone who has never questioned our culture’s conventional ideas about humanity, as well as being
perhaps the most entertaining and unique telling of this profound understanding you will ever find.”

“Some people I have recommended Ishmael to have not been able to get into it. I don’t know if it is the
telepathic gorilla or something else but The Book Of The Damned presents the basic ideas of Ishmael
in a very compact form. However, if you can’t be bothered to at least entertain the premise that there is
something dangerous in the direction humanity is headed and that something should probably be done
about it, it won’t matter how concise and clear the teacher is, fictional gorilla or otherwise.”

“Thinking outside the box has become a slogan, sometimes meaningless. Much harder to do is think outside our cultural norms. Daniel Quinn does this beautifully and I think most of us who read him know instinctively he is right. Isn’t it sad that we live in Paradise and have made a hell out of it?”