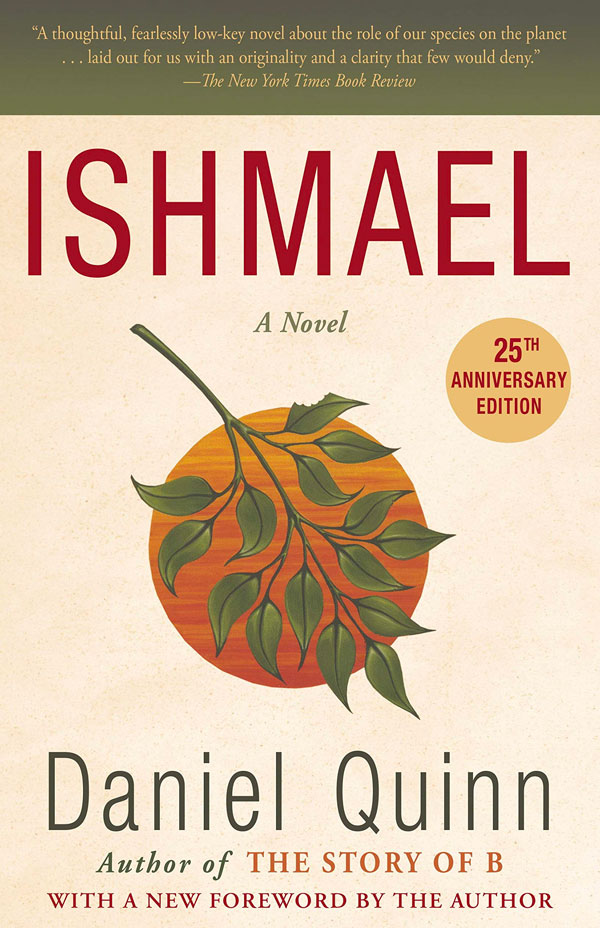 Ishmael is a half ton silverback gorilla. He is a student of ecology, life, freedom, and the human condition. He is also a teacher. He teaches that which all humans need to learn — must learn — if our species, and the rest of life on Earth as we know it, is to survive.

In 1989 Ted Turner created a fellowship to be awarded to a work of fiction offering positive solutions to global problems. The winner, chosen from 2500 entries worldwide, was a work of startling clarity and depth: Daniel Quinn’s Ishmael, a Socratic journey that explores the most challenging problem humankind has ever faced: How to save the world from ourselves.

The book opens with a deceptively ordinary personals ad: “Teacher seeks pupil. Must have an earnest desire to save the world.” Seeking a direction for his life, a young man answers the ad and is startled to find that the teacher is a lowland gorilla named Ishmael, a creature uniquely placed to vision anew the human story.

Ishmael’s paradigm of history is startlingly different from the one wired into our cultural consciousness. For Ishmael, our agricultural revolution was not a technological event but a moral one, a rebellion against an ethical structure inherent in the community of life since its foundation four billion years ago. Having escaped the restraints of this ethical structure, humankind made itself a global tyrant, wielding deadly force over all other species while lacking the wisdom to make its tyranny a beneficial one or even a sustainable one.

That tyranny is now hurtling us toward a planetary disaster of pollution and overpopulation. If we want to avoid that catastrophe, we need to work our way back to some fundamental truths: that we weren’t born a menace to the world and that no irresistible fate compels us to go on being a menace to the world.

Since Bantam first published Daniel Quinn’s utterly unique novel Ishmael in 1992, the novel has grown into a bestseller. Ishmael has garnered rave reviews and has been adopted for classroom use in schools coast-to-coast, including Dartmouth, the Naval Academy and Stanford University. Along the way, Ishmael gathered a devoted following as thousands upon thousands of readers have written to Quinn to express how the book has changed their lives.

Quinn’s first version of the award-winning novel was written in 1977 and was followed by seven more complete and distinct versions. The character Ishmael appeared only in the eighth, and final, version. This is also the only version written as a novel. “I was ready to admit defeat when Ted Turner announced his plans for the Turner Tomorrow Fellowship. I felt, if I read him right, he was looking for exactly the sort of book I was struggling to write, and this encouraged me to give it one more try. I’m certainly glad I did.”

Quinn says Ishmael is a story about hope. “I think we have a much finer and more exciting destiny than conquering and ruling the world,” he says. “This book shows that we can learn about what that destiny is from the life around us – and in Ishmael it just happens that life speaks with the voice of a lowland gorilla.”

“Ishmael is the book I buy 10 at a time and give away to all sorts of folks.”

“A thoughtful, fearlessly low-key novel about the role of our species on the planet…
laid out for us with an originality and a clarity that few would deny.”

“This Daniel Quinn book, Ishmael…I’ve never recommended a book before,
but I would actually, recommend it to everyone….
But this book, it’s kind of the book of my …
My whole year has been kind of with these thoughts in mind.”

“Discovering Daniel Quinn was like finding the seventh side of a cube.”

“…fascinating…Quinn’s smooth style and his intriguing proposals should hold the attention of
readers interested in the daunting dilemmas that beset our planet.”

“From now on I will divide the books I have read into two categories
– the ones I read before Ishmael and those read after.

“…Suspenseful, inventive and socially urgent as any fiction or
nonfiction book you are likely to read this or any other year.”

“…someone sent me a copy of Daniel Quinn’s book, Ishmael.
I’ve now read it six times and I’m here to tell you that (author Paul) Hawken and Quinn together
will not only change your life, but make you understand why it should change.
They did both for me.”

“Before we’re halfway through this slim book we’re lost, we’re in his grip,
we want Ishmael to teach us how to save the planet from our­selves.”

“Reading-wise, Ishmael is a delight.”

“Deserves high marks as a serious — and all too rare — effort that is unflinchingly engaged with fundamental life-and-death concerns.”

“Arthur Koestler, in an essay in which he wondered whether mankind would go the way of the dinosaur, formulated what he called the Dinosaur’s Prayer: ‘Lord, a little more time!’ Ishmael does its bit to answer that prayer and may just possibly have bought us all a little more time.”

“Ishmael has brought to life the dormant seeds of a new mindset,
one that will hopefully put us in harmony with our Earth.”

“Ishmael is a wonderful book and I shall read it again when I can retrieve it from my 16-year-old son.”

“When I finished the last page of Ishmael I sat right up in bed and said “Oh, thank you Daniel Quinn!”

“Immediately upon finishing Ishmael I spent two days in shock.”

“It is stunning, brilliant, a precious gift.”

“I don’t know what to say, or how to say it, except that Ishmael really put it into focus for me.”

“In a world that lacks wisdom, Ishmael pro­vid­es a confirma­tion of insight and hope!”

I will remember Ishmael. I wish I’d known him first-hand.

“Ishmael was at first charming, provocative and intellectually stimulating; then it became challenging and inspiring.
I will be recommending it to everyone I know. Hopefully it will change their thinking as it did mine.”

I felt like I met a friend when reading Ishmael.

“I read Ishmael in 24 hours. With ecstasy and agony, sobs and cheers. To say thank you doesn’t even come close.”

“Whatever else is true in my life, I am very different since I read Ishmael.”

“I have just finished Ishmael at one sitting and am overwhelmed by it.”

“Ishmael may be the most important book I’ve ever read.”

“I have just finished reading Ishmael, and all I can say is wow.
It is a great contribution to us all, and I have been deeply moved by it.

“Not a day goes by that something or some occurrence will remind me of a part in Ishmael
that explains or at least makes me look at it in a different way.”

“The end of Ishmael is a beginning, the beginning of a network.”

“Ishmael could well be the next “Greatest Story Ever Told,”
coming as it does at this most critical time in the life of our planet.”

“As with all books I read, I borrowed this one from the public library, but like no other book I have read,
this one prompted me to buy a copy, reread it, highlight the passages which affected me so much
and then lend it to as many friends as I can convince to read it.”

“Ishmael is a profoundly philosophical and deeply religious book.
It should be required reading for the general population.”

“Someday, if the school system ever comes up with the money, I hope to order a class set of Ishmaels and maybe,
in teaching the book, a spark can kindle somewhere.”

“I wish it could be required that everyone read it – it’s so very important. I bought a copy of Ishmael yesterday and finished reading it at 3:30 a.m. I am an 84-year-old female high school dropout, but I got it.”

“Once or twice a year I buy a book which is available in the library;
this is one which belongs on my shelf, since it is now in my heart.”