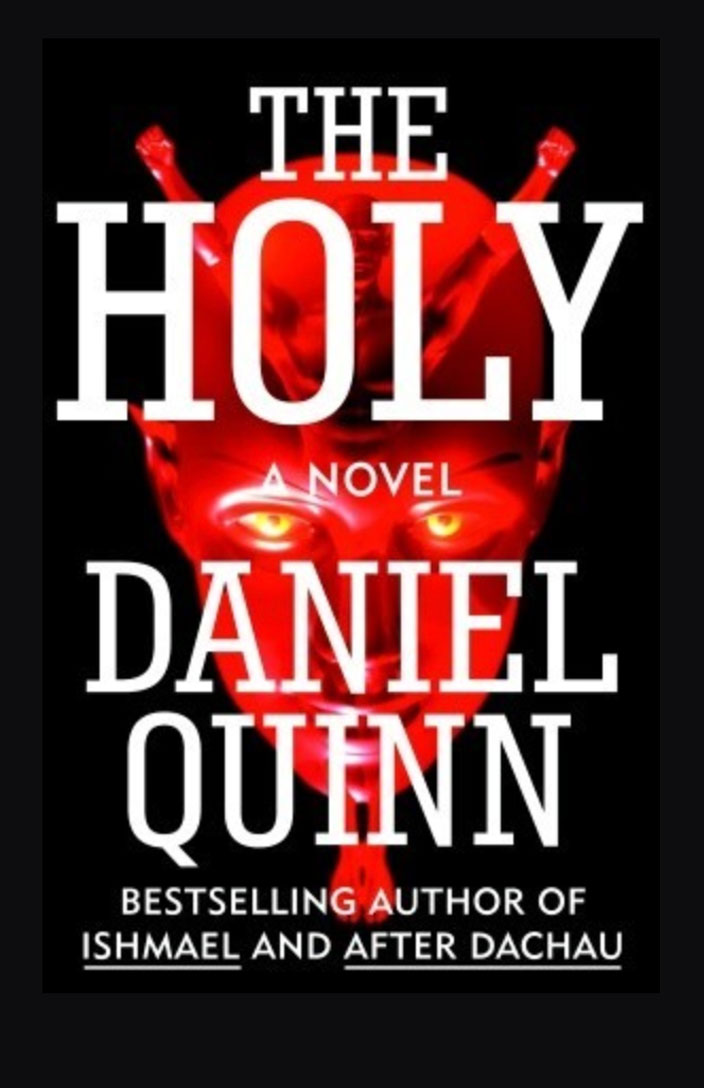 The journey of a lifetime.

In 1939, in an extraordinary encounter in the stolid prairie city of Omaha, Nebraska, this book had its genesis. In 1985, in the high desert of New Mexico – The Land of Enchantment – it came into being.

In Providence Daniel tells the story of his childhood dream about a beetle that led him into the woods so that he could learn what he was supposed to pass on to others. When he first told me this dream, which had haunted him for nearly forty years, I knew it was something that couldn’t be pushed away and ignored as he had been trying to do. Ultimately, that dream meeting resulted in Ishmael and the succeeding books that you’re all familiar with – that many have come to think of as the essence of Quinn.

But he also told me another story, about an eerie and even more haunting experience that had hovered at the back of his mind longer than the beetle dream. “I was playing on the floor in my room,” he said, as we stood shivering in the Chicago wind on the corner of Lakeshore Drive and Diversey Avenue waiting for a cab one winter night in 1976.

“I was still too young to go to school, but I was anticipating it, wanting to learn things I didn’t understand but that I picked up from the grownups around me. I was used to entertaining myself, and I was having a good time doing whatever it was that engrossed me. In the midst of my play, for some reason, I looked up, and at the window I saw a shape, what seemed to be a man, though it didn’t quite look like a man. More like part man, part animal. His skin was mottled. His head was huge, with heavy brows, and coming out of it were colorful twisted horns, like snakes. It was a kind of being I’d never seen before, could never have imagined.

“It wasn’t like any creature in any picture book I had. When I got up to look closer he looked at me in a strange way – half scowling and half grinning – and he seemed to be very pleased with his horns, as if they were something special. When he looked at me, it was as if he knew me and could see into me in a way that no one else could. But I didn’t mind. I didn’t really feel afraid. But I was excited and ran to the kitchen to tell my mother. She listened to me but then just told me I had imagined it. There was no such thing as what I saw.”

When he finished the story, I shivered, not just from the cold but because I too had experienced some strange things and understood this was not just a scary story for a dark night. When we finally got a cab and got home he drew the creature as he had seen it so many years before. He knew it as a true thing, and I knew it was a true thing – just as the dream of the beetle had been a true thing. And we knew that, ultimately, this encounter would be something Daniel would have to come to grips with and do something about. My telling of this story is, of course, not verbatim. I don’t have a tape recorder mind. But it’s the essence of what he said. And it’s the essence of that experience that ultimately drove him to capture its truth and create a novel that introduces the beings that called to him that day so long ago and that we’ve forgotten about or are afraid to acknowledge.

And so, we have The Holy. And in The Holy, we have a boy, Tim Kennesey, who, in the prologue experiences what Daniel experienced. (Though, as Daniel says of the prologue, “For the sake of the narrative, it’s somewhat more detailed than my actual memory. For example, I don’t remember what the “man” was wearing – that was hardly what I was looking at. But the rest is exactly as I remember it, including the conversation with my mother. I certainly didn’t “imagine” it, and it wasn’t a delusion or a hallucination. It provided me with a lifelong belief that there are more things in the world than we ordinarily see. I suspect that many children see such things – until their well-meaning parents teach them not to see them.”)

And in The Holy, we have Tim’s father, David, who himself, early in life, had experienced a similar event but had tried to forget. It’s David who’s compelled, in midlife, to go back and find the road he didn’t take. In the process, he involves his son, Tim, and his wife, Ellen, in a journey into the unknown, which is sometimes fearful, sometimes haunting, sometimes horrifying, and sometimes just plain odd.

Though David doesn’t know it, others too are on this path, but coming from a different direction. An old man, Aaron Fischer, wants to know what happened to the gods his ancestors were forbidden to worship – Baal, Ashtaroth, and others of that ilk – not because they didn’t exist but because they were “false gods.” To find the answer, he hires a reluctant detective, Howard Scheim.

Enough said. I won’t give away the tale. But I have always believed that novels are the best teachers – not necessarily novels that proclaim themselves as teachers, but novels in which the characters, their problems, frustrations, and concerns, give us the opportunity to look both at ourselves and beyond ourselves. I’ve always found, in the working out of a novel, as the characters find their way, I too find my way. With a novel that speaks truly, it’s a nearly effortless journey too.

In Daniel’s teaching novels, the message is spelled out in bold letters. In The Holy, as in After Dachau, the message is incorporated into the lives and actions of the characters who live the story. For me, this is as it should be. And for me, The Holy is the essence of Quinn – the premier of Daniel’s books. I hope it will be for you as well.

“The Holy should keep readers turning its pages long into the night, searching for answers.”

“Daniel Quinn’s The Holy is a mosaic of interlocking quests, robustly written and filled with astonishing ideas. It keeps flirting with generic conventions – of thrillers, of horror fiction, of new-age novels – but, every time it threatens to fall into cliche, it pulls an unexpected trick that plunges it into deeper and more startling waters. . . . a profoundly satisfying story, both grand and intimate, that bristles with excitement.”

“The Holy, by Daniel Quinn, best-selling author of Ishmael, is a dazzling metaphysical thriller.”

“This is one of those books where I wish to become a film director just so I can make this into a movie.
Quinn’s food production rants and points of view on societal collapse are only a backdrop to a story that’s
fast-paced, riveting, and all around just sucks the reader in. ”

“I loved this book. It often reminded me of John Fowles The Magus, another reality-bending story and
ne of my favorites. Things are not what they seem, on more than one level, and layers are
stripped off slowly to get to the heart of the mystery.”

“I personally felt that The Holy was a wonderful experience and I treasure the time that I spent reading it.
I could spend all sorts of energy explaining every nuance of The Holy to you, but I won’t.
If you want to open your being to yet another exciting and truthful story, read The Holy.”

“Given my interests for several years now, and at this time in my life, this is one of the most potently challenging books I’ve ever read! Looking into the ongoing, ancient forces and powers co-existent today through the means of a detective story (of sorts) was a brilliant choice of vehicle…and, what a fine story it is. I would love to read a sequel!”

“I loved the Ismael trilogy and wasn’t too sure about trying a novel. But Mr. Quinn has once again exceeded my expectations and delivered a page turner. Loved every new twist and turn . . . and as for the end.”

“His ideas are original and thought provoking as always, but in The Holy he really weaves
a beautiful tapestry on which to convey his ideas.”

“Quinn has a beautiful way of writing, describing the characters so detailed and perfect, that you exactly know what to think about them. There are no cliches, no stereotypes. The story is outstanding, getting everywhere from crime to gambling to religion to murder to fate to satanism to animism to zombies and to life itself.”