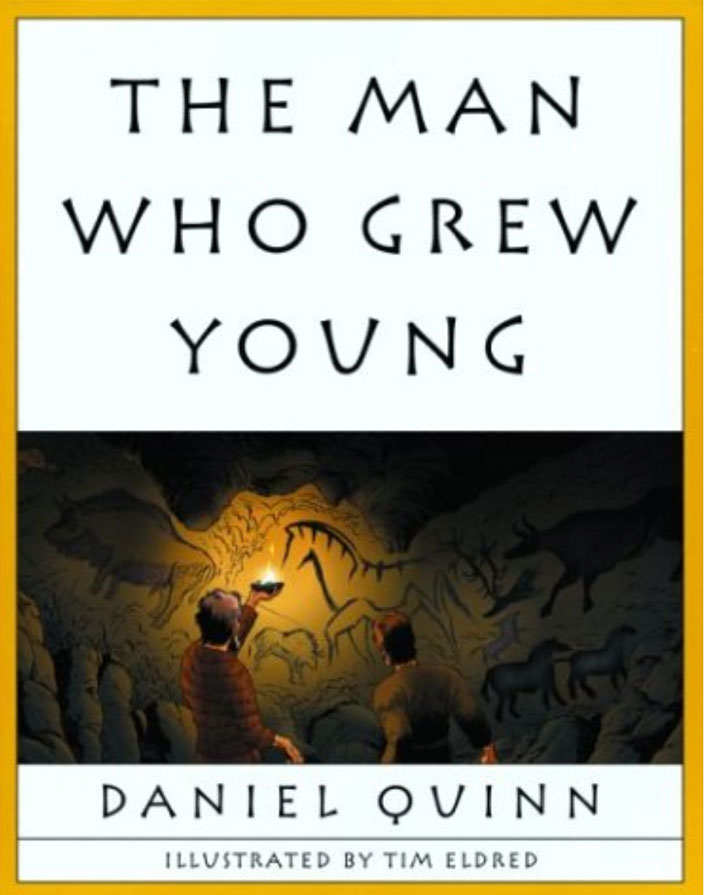 Daniel Quinn strikes again with this full-color, illustrated novel. What’s going to happen when the universe comes to the end of its string? Like a cosmic yo-yo, it’s going to start traveling back UP the string, to its beginning and every life that has ever been lived will be lived again: in reverse. The strangest adventure to be found in this backward-running universe is that of Adam Taylor, whose epic quest through time cannot end until he finds his way into the womb that gave birth to us all.

“Quinn’s latest graphic novel incorporates his interests in alternative realities and the environment while using an odd and engaging narrative device.

The entire social, technological and biological life of the planet, and indeed the universe, is traveling backwards. People are ‘born’ in cemeteries, dug up and transferred to a hospital where they awake into life.

In this strange universe, individuals enter life as adults driven by fate to reunite with (and reenter) their mothers, all the while growing younger as they return like salmon to the point of their beginnings.

Quinn’s book offers an elegant cosmological loop suggesting that at death we just start over again in another realm retracing our existential steps. Mankind methodically abandons technology; incredibly, coal and raw resources are put back into the ground; computers are discarded for typewriters and the great cities are dismantled.

But Quinn’s protagonist, Adam Taylor, is the odd man out, his mother nowhere to be found. Seemingly immortal, Taylor outlives his peers to witness entire human epochs pass before his eyes in reverse until he reaches the very beginning of civilization and an answer to the riddle of his mother’s whereabouts.”

“Daniel Quinn always surprises me with his ability to think outside the lines and create alternative realities.
He wanted to write a novel that went backward in time.
“Impossible” he was told. Impossible to write, impossible to sell.
His preface “The Lure of the Impossible” provides raw encouragement to
every writer who has tried to push the envelope.”

“This is a book that really takes your mind and reprograms it in a more pleasant way.
Just when you feel you’re starting to “get things” and the answers are of grim feelings a book like this
comes along and raises your sprints and gives hope. It makes me wonder were we always this dissatisfied
with life or do we lose happiness the further we get from our real life source, nature?”

“This guy is a truly masterful writer – makes you think.”

“Very unique and creative presentation. Thought provoking. Recommend to everyone.
Even for non Daniel Quinn fans and those who do not read graphic novels this is a great book..”

“As I have read Ishmael and I have also read this, I can say that I admire Daniel Quinn’s ability to convey unique and thought provoking ideas into works of fiction. . It is a fascinating read and one that lasted with me for several days as I wondered about its premise. The idea of unlearning what you knew was very intriguing to me..”

“The Man Who Grew Young – is a phenomenal and powerful book that illustrates the world moving in a different
direction. Aside from the beautiful artwork – which in itself makes this book a great addition to any collection
– the story itself borders on revolutionary and visionary. Challenging all levels and concepts of history and humanity,
the story takes you on a truly amazing journey through time.”

“The end of Ishmael is a beginning, the beginning of a network.”

“I have read most of Quinn’s books and as an author he is extraordinary. All of his books have opened up new thought processes and gotten so many of my questions about our place here in this world answered.”

“This book is a work of art. By both the author and Illustrator Tim Eldred. It gives you a different look at history.
It also makes you realize our place in the community of life. If you fear death, read this.”