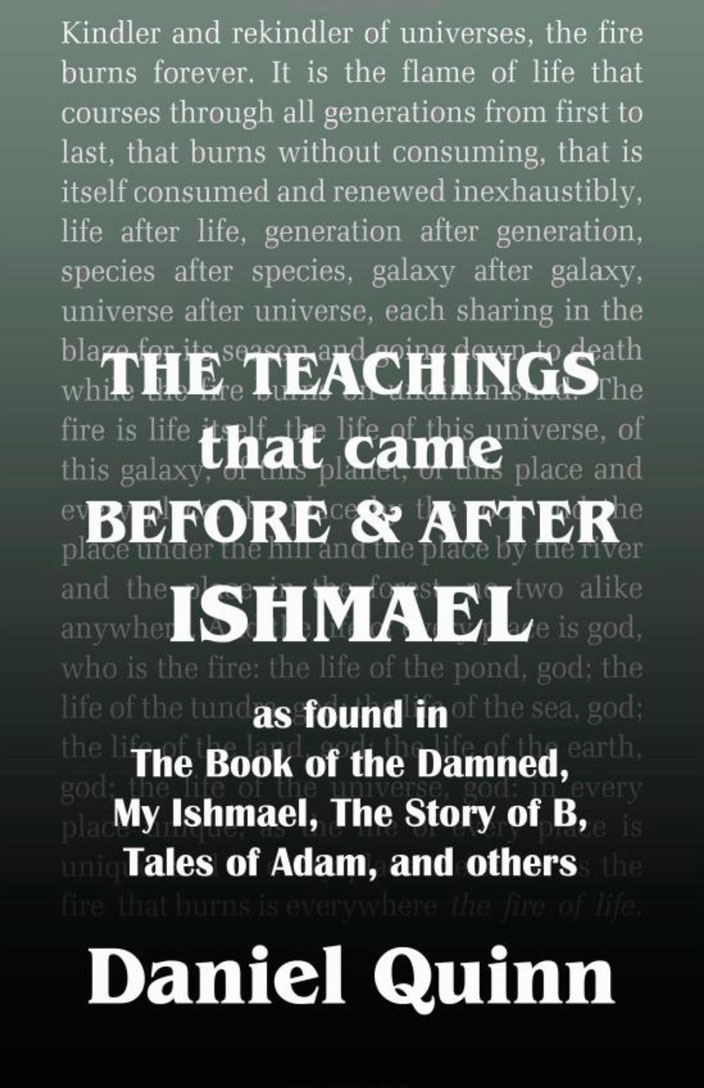 But, though I didn’t stop with Ishmael, most of my readers did. Very few of them went on to sample any of the later courses. That’s why I decided to put this book together. It’s a collection of appetizers, generous samples of all the books that followed Ishmael – and of the books that came BEFORE Ishmael. Reading here, you’ll see that in earlier writings – Tales of Adam and The Book of the Damned – I accomplished some things that I never managed to surpass in any of the later books (including Ishmael).”

“I enthusiastically recommend it to those, like myself, who have read all of Daniel Quinn’s work. It helps to be reminded of the teachings. Even moreso, I recommend this to people who have only read Ishmael. You are in for a treat. As always, Daniel Quinn’s writing is entertaining, instructive, and thought provoking.”

“If you are a Daniel Quinn fan this is a must have! Amazing book. It had all the main points of his major books.
If I had one book to give tell somebody to read it would be this one. Words do not do it justice.”

“David Byrne asked, “How did I get here?”
Daniel Quinn gives you the tools perspectives to answer the question for yourself.
Can’t say enough.”

“Daniel Quinn’s newest book the Teachings That Came Before & After Ishmael covers several of his works and
an enormous amount of factual information that includes diverse topics tying together creative solutions to
global problems. Even though the book was an easy read it is compelling, very deep and intense.
It is written to be thought provoking not just about the topics but also affords the reader self evaluation
bringing one closer to their true character and soul.”

“I am a big DQ fan and over the years have read almost everything of his I can put my hands on. This book is a compiled collection from his other books which he assembled to provide less earnest readers a sampling of the other books. I’ve been bouncing around and love having so much thought provoking Quinn in a single volume.”

“Most people finish Ishmael with a mix of enthusiasm for the ideas and sadness that the journey is seemingly over. But it isn’t over by far. With The Teachings, you can move forward, backward, in and around the mind of Ishmael. Daniel Quinn has compiled key readings from the works that led to and flowed from Ishmael.”

“Daniel Quinn’s canon of intellectual and literary achievements, as encapsulated in
The Teachings That Came Before & After Ishmael, represents a fertile, rational, and inspiring
indication of the kind of cultural vision-shift we are ready for.”

“Quinn’s writings are conversational and forthright. They stimulate the mind and give sense to the confusion of many
of life’s pre-eminent issues. Somehow, after reading The Teachings, I feel a sense of calm, serenity, and peace about
what “is.” I recommend this book highly and encourage everyone who cares about their life in relation to
Planet Earth to purchase and read this and all of his novels.”

“As an author who truly cares for the welfare of every living thing on this earth, he artfully and without reservation will grab your hand and take you straight down the rabbit hole to the final answers that you’re looking for.
“How did things come to be this way?” will no longer be a mystery.”

“I’ve always loved reading Quinn’s books and even for someone who thought they’d read them all in full,
this brought new stuff to the table. Beautifully written and very relevant.”