The Human Future: A Problem in Design

The Human Future: A Problem in Design

People who invite me to speak on occasions like this one are usually in for a surprise, because instead of delivering whatever happens to be my current lecture (or some modification thereof), they get an altogether new creation. That’s the good news. The bad news is that they don’t get the kind of highly finished product that has been refined though a hundred repetitions.

The first thing one is asked to supply is of course a title. The speech hasn’t been written–hasn’t even been pondered–but the organizers of the event have announcements to make, brochures to put together, and so on. So the title comes first. The title in this case is a grand one: The Human Future: A Problem in Design. Having THAT all taken care of, one must then begin to wonder what one is actually going to say–and hope that, in the end, the result will sounds like it has something to do with the title. Sometimes one succeeds in this, sometimes not. You’ll be the judge.

Among the preoccupations of my work are anthropology, history, archeology, evolutionary biology, and sociology. This is of interest because, although I’m not a professional in any of these fields, I nonetheless seem to have succeeded in saying something useful to professionals in these fields. Design is also a preoccupation of my work, and we’ll see if I have anything useful to say to YOU about it.

Everyone nowadays is more or less aware that what we see around us in the world of nature is the result of a design process called evolution. This was not always the case of course. For thousands of years in our culture, it was imagined that what we see around us was the work of a divine designer who delivered the finished product in its eternally final form in a single stroke. God not only got everything right the first time, he got it so right that it couldn’t possibly be improved on by any means.

Since the nineteenth century, this antiquated perception of the world has largely disappeared. Most people now realize that the marvelous designs we see around us in the living community came about through an exacting process called natural selection. Human design–and by this I mean design BY humans, not design OF humans–is similar to evolutionary design in some ways and different in other ways.

Human design is always directed toward IMPROVEMENT. Evolutionary design, on the other hand, only APPEARS to be directed toward improvement, and this confuses a lot of people. It leads them to imagine that evolution is HEADING somewhere, presumably toward the eternally final forms that God created in a single stroke. Evolutionary design in fact merely tends to eliminate the less workable and perpetuate the more workable. When we look at a seagull or a giraffe or a cheetah or a spider, we see a version of the product that’s working beautifully–because all the dysfunctional versions have been eliminated from the gene pool of that species through natural selection. If conditions change, however–and we had the leisure to watch– we’d see these apparently perfect forms begin to change in subtle ways or dramatic ways as natural selection eliminates the less workable adaptations to the new conditions and perpetuates the more workable.

Design change is a reaction to pressure–and this is true of both evolutionary design and human design.

The same is true of human design. If I were to show you a paleolithic handaxe and a mesolithic handaxe, you’d be hard put to know one from the other. In a million years, there was virtually no pressure on people to improve their stone tools–and they didn’t, at least not intentionally. During the period between the paleolithic and the mesolithic, minute, unnoticed improvements were being made, imitated, and unconsciously handed down in every generation, accumulating over the millennia to produce tools that an expert would immediately recognize as mesolithic. 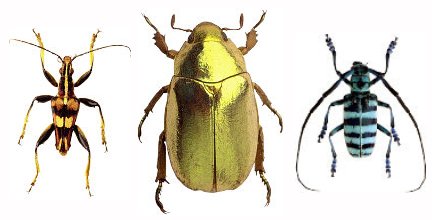 Here we see three products of evolutionary design–three beetles, in fact. One useful way to see these three products is as answering three distinct but related market demands. The beetles at the right and left are both longhorns–so called, of course, because of their long antennae. Although they’re very close genetic relatives, the longhorn at the left has been shaped by natural selection to meet slightly different demands than the one at the right. The beetle in the middle (called, for obvious reasons, Plusiotis resplendens), has been shaped to meet very different needs than its relatives to right and left. The longhorn at the right would not do badly in the niche of the longhorn at the left, and vice versa, but they would probably fail in the niche of the P. resplendens.

Here we see four more products of evolutionary design–four different beaks. It hardly needs to be pointed out that these beaks answer to very different market needs. The macaw doesn’t need (and couldn’t use) the beak of the waterbird at the bottom right. Nor could the vulture or the parrot. There is no one right way to shape a beak for birds. One beak for all is a concept that literally will not fly. 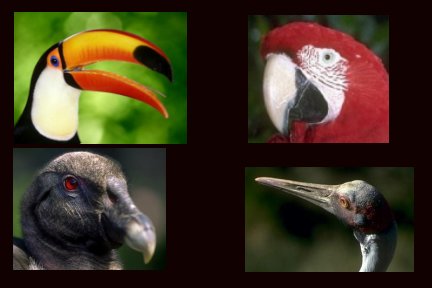 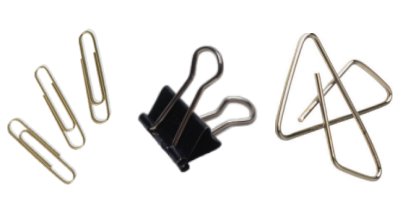 Here we see three products of human design–three different types of paper clip. Clearly these also answer distinct but related market needs. People need the clips at left for small jobs, two to ten sheets of paper. The clip at right can also be used for small jobs, but it wouldn’t be one’s first choice. It’s designed for medium size jobs, ten to thirty pages. The clip in the middle, of course, is for large jobs.

Here are three more products of human design, again answering very different, though related, market needs. As we all know by now, there is no one right way to save data. One disk for all purposes is not a viable idea. . . . The response time to pressure for design change differs very significantly between evolutionary design and human design. 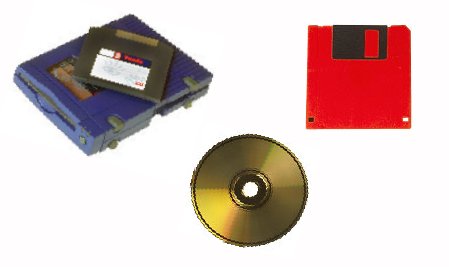 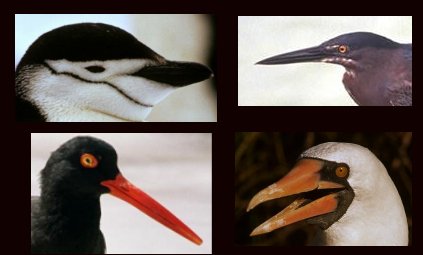 For obvious reasons, I’m not able to show you photos of these beaks at various stages of evolution.

Nor am I able to show you photos of these beetles at various stages of evolution. The period of time over which they developed their distinctive shapes is just too long. But because human design is capable of responding to pressure much more quickly, I can show you . . . 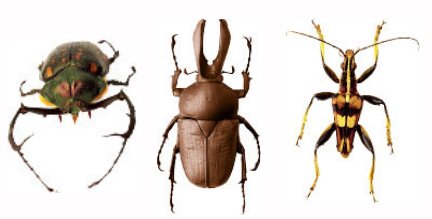 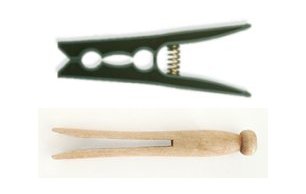 Two stages in the evolution of the clothespin. The wooden clothespin at the bottom has been around for a long time, and is not extinct even today–because, in fact, it’s cheap, it’s simple, and it works as well as it ever did. Where, then, did the clothespin at the top come from? It isn’t notably cheaper, and it’s notably more complex. It does possibly WORK a bit better, at least for certain jobs. If you’re hanging something out to dry that’s very thick, the pin at the bottom is likely to pop off–or break, if you try to push it down too far. But of course the pin at the top didn’t come into being because the public was screaming for a better clothespin. It came into being because it enabled some business to increase its market share.