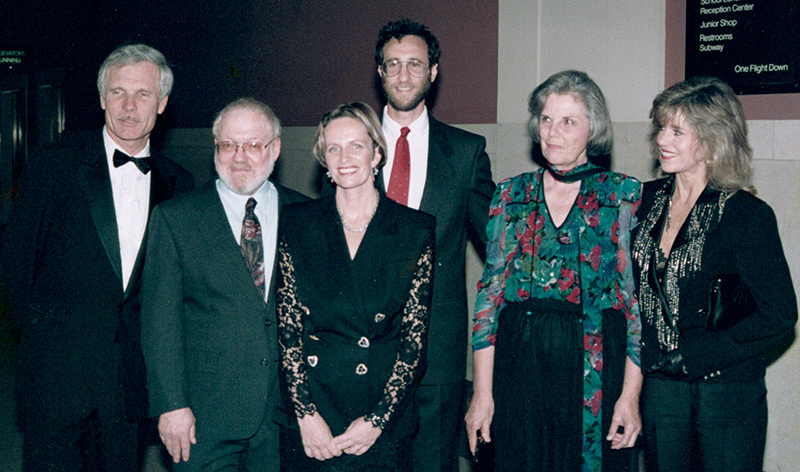 Ted Turner and Jane Fonda at the Turner Tomorrow Awards dinner in New York with winner Daniel Quinn, for Ishmael,
and Sara Cameron, Andrew Goldblatt, and Janet Keller, who received $50,000 awards for their novels.

Read about the Turner Tomorrow Fellowship

The awards dinner was held in the Hall of Ocean Life at the American Museum of Natural History on June 3, 1991.

Ted Turner presented Daniel with a crystal trophy – the globe of the world atop a pedestal – inscribed “The Turner Tomorrow Award, Daniel Quinn, Ishmael.”

The envelope in Daniel’s hand contained a check for the first installment on the half-million dollar fellowship, which was paid over five years. 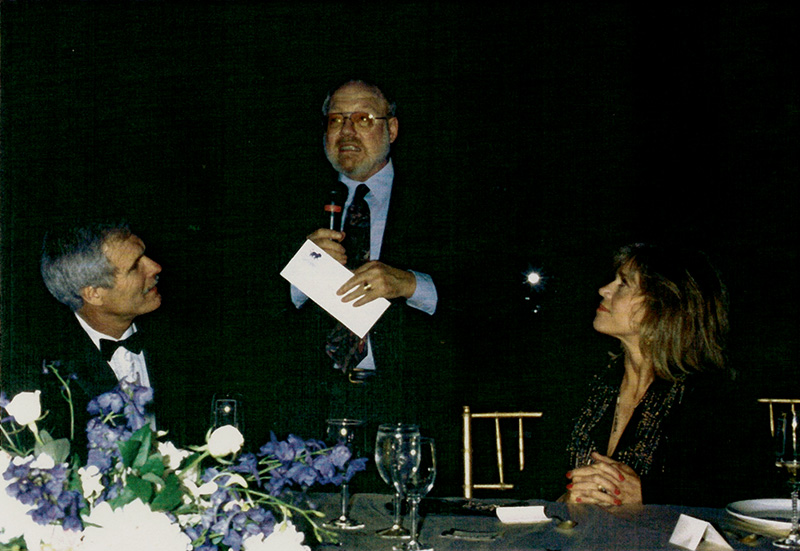 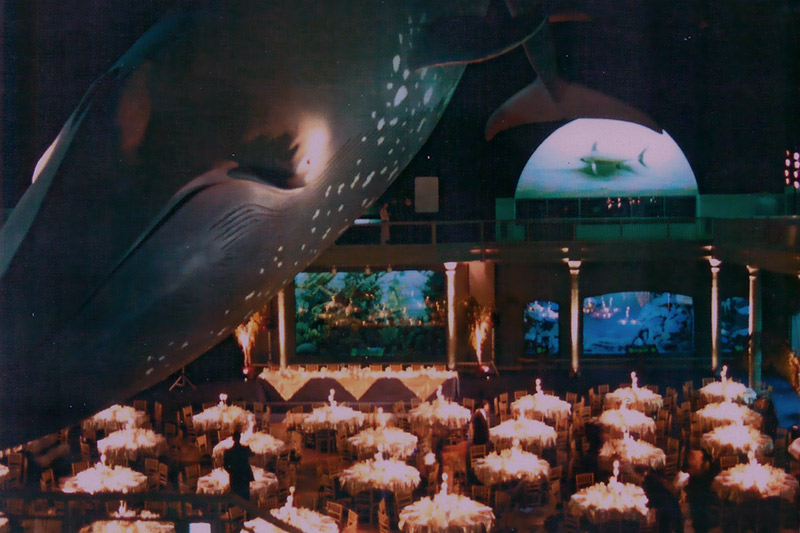 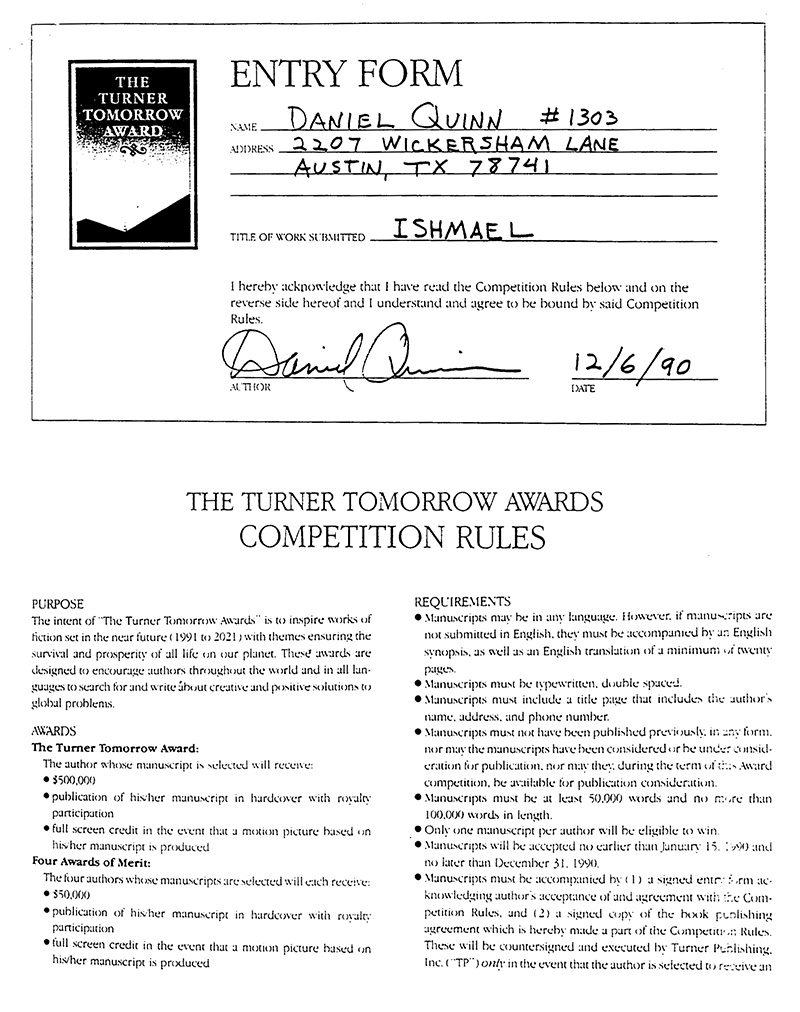 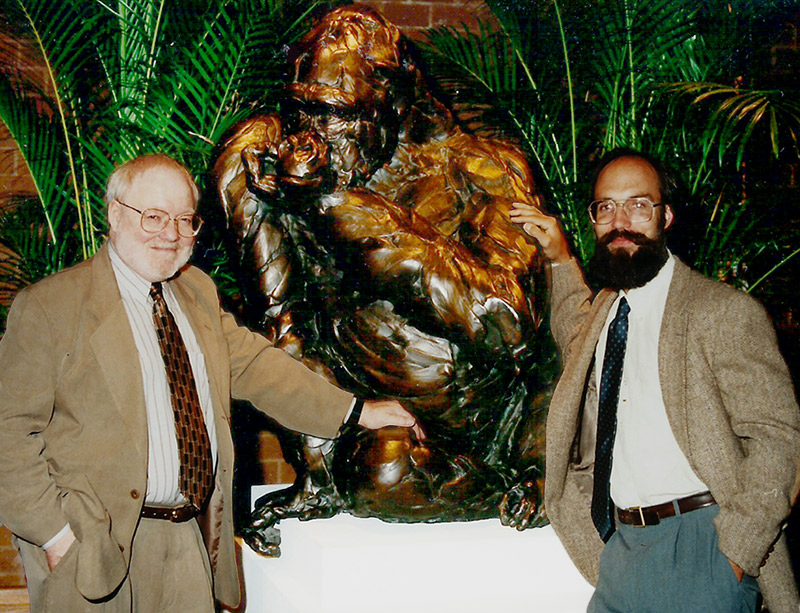 On Earth Day, April 22, 1996 Daniel shared the stage at Salisbury State University (since 2001 Salisbury University) with sculptor Bart Walter’s  bronze Ishmael when it was unveiled for public viewing for the first time.

This event had its beginnings a year or more earlier, and it came about in this way: For their extensive outdoor art collection the university had previously purchased a chimpanzee sculpted by Mr. Walter.  Since Ishmael was widely used at the school at that time, one of the executives shared a copy of the book with the sculptor. In a February 1995 letter to Daniel, he said, “The artist so enjoyed the book that we contracted with him to do a life-size gorilla for us.”

As work progressed, Daniel received reports on its progress and an invitation to participate in the presentation ceremony. In October 1995 a fax arrived, that stated: “Ishmael has arrived and we are anxious to set a date to unveil and dedicate the statue. Please let me know if you remain interested in participating in the celebration.” Well, of course, the answer to that was “Yes, I’ll be there.”

Six months later, the bronze Ishmael, Daniel Quinn, and Bart Walter were all present to help dedicate this magnificent sculpture, in a ceremony attended by students, faculty, townspeople and readers of Ishmael from the surrounding area.

More information and photos about Bart Walter are on the INSPIRED page. 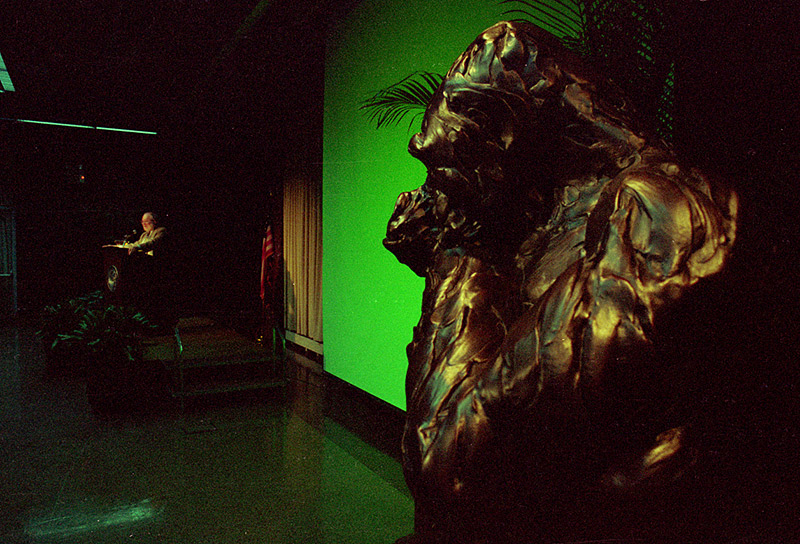 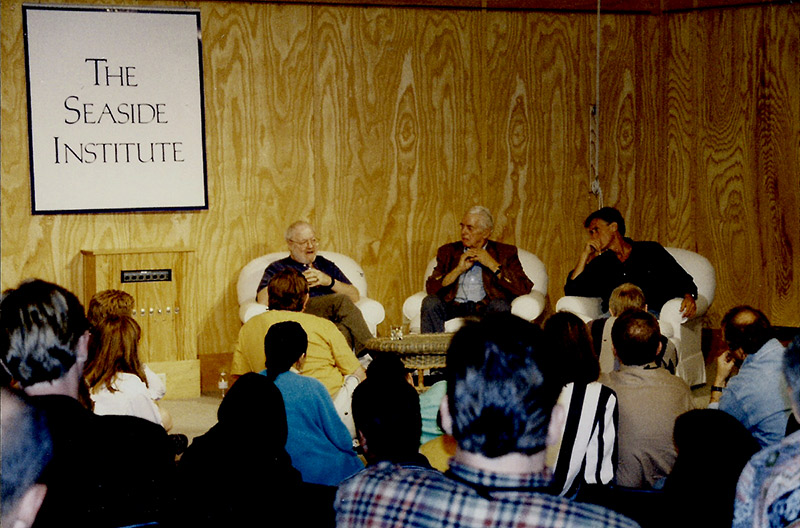 Read about the VISION 2000 Event

VISION 2000 was the brainchild of Ray Anderson (1934-2011), founder and CEO of Interface, Inc., the world’s largest manufacturer of of carpet tiles for commercial use. This group of 50 or so designers, architects, manufacturers, and customers such as McDonald’s and Gap – people usually at odds with each other in the creation of commercial interior spaces – met for the first time in 1993 to try to find ways of working together. The gathering was so successful it became an annual conference, and its purpose expanded to focus on ways of using their positions to promote sustainability and ecological soundness among their clients.

As a result of reading Paul Hawken’s The Ecology of Commerce, Ray and his staff had already begun to redesign Interface – several thousand employees and plants around the world – to reach sustainability by the end of the century. Around 1994 Ray was introduced to Ishmael and it affected  him in the same way it did so many other readers. Soon after, he wrote Daniel and invited him to to be the keynote speaker at the 1995 conference. Daniel’s big question was: “What in the world does Ishmael have to do with commercial design and manufacture?” “A lot,” Ray said.

Paul Hawken and David Brower (1912-2000), founder of Earth Island Institute and considered by many to be the father of the modern environmental movement, were invited to participate in the conference as well. The resulting three days were most incredible! 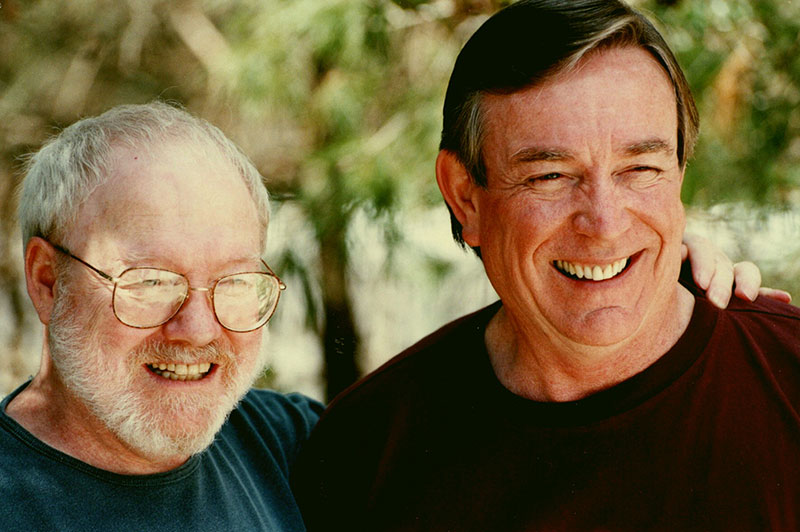 Daniel Quinn and Ray Anderson at VISION 2000: Renewing the World Within

One of the highlights of VISION 2000 1995 was an evening of presentations interpreting concepts from Ishmael. Before arriving at the conference everyone had been sent a copy of Ishmael and was asked to read it. They were then assigned to a “Dream Team” of about eight others from different parts of the country and asked to develop a skit or some other form of graphic presentation of an idea from the book. Daniel and I were given the job of judging this event.

There were song and dance acts, a prison escape act, and an Ishmael fashion show, to name just a few. All were creative and fun, and because we couldn’t decide among them we gave them all first prizes. But the Ishmael Award went to a group that had built the Taker flying machine out of used Interface carpet tile boxes. It was a masterpiece, a biplane with movable wings. Midway into the skit, as the group milled around moaning about the mad flight to the ground that could only end in destruction, someone suggested trying something new. The idea caught on, and as the plane continued its flight, they pulled apart the wings, repositioned them, and ended up with a sleek little two-winged model that floated safely to the ground to the jubilation of all. This seemed to us to be a wonderful example of what Daniel keeps saying: Before you can do anything you have to think differently. Namely, you need to think it’s possible to create change and then go about figuring out how it might be done, even though it looks as if there’s no time at all to accomplish anything.

The final session was scheduled as a dialogue between Daniel, Paul, and David. But by this time, the participants were so fired up they didn’t want to listen to the “experts” talk to each other. Instead the meeting became a very lively dialogue in which conference participants began applying  what they’d heard from the speakers and beginning to discover ways they could implement these ideas in practical ways in their own spheres of operation when they got back to work. A very exciting and unexpected conclusion to the conference!

All the sessions were taped, and I found one of these as we were preparing this new website. Though I’m not sure what’s on it, it’s being transformed from videotape so that it can be accessed here when it’s ready. –RMQ